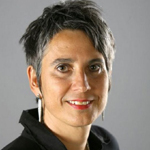 is the founder and Executive Board Member of the women's rights organisation Medica Mondiale. She has led a very international life: secondary schooling in Switzerland; extended stays in Israel and Sri Lanka; medical studies in Innsbruck, Austria, which she completed successfully in 1984; State Examination in Bologna, Italy; licence to practice medicine in Germany; assistant doctor in Essen, Germany; with further training and specialist certification in gynaecology. At the end of 1992, Monika Hauser sees media reports about the mass rape of Bosnian woman during the Bosnian war. She travels straight into the war-torn area to help. In April 1993, together with about 20 local female psychologists and doctors, she opens the women’s therapy centre Medica Zenica in the town of Zenica. An office is set up in Cologne for the charity Medica Mondiale.